Espalier Technologies was founded in November 1998 in Zurich as a privately owned partnership between Joe Pullen and Marcus Rimmer. The initial focus is to provide middleware consulting services for major Swiss financial institutions such as UBS and Swiss Re.

In 1999, Raphael Wysseier joins as a partner. The restaurant ratings portal zaprate.com is developed and goes live.

Espalier Technologies opens a dedicated research and development office in the center of Zurich to help its customers to start to design true mature J2EE applications using technologies such as EJB and JMS. 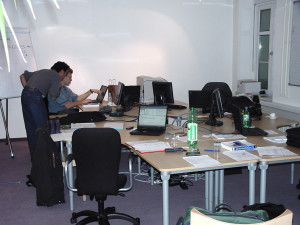 Espalier Technologies grows steadily with the addition of several new consultants and the forming of partnerships with key vendors, notably BEA Systems. It is successful in building secure integration for several large customer projects using technologies such as SSL, XML and web applications based on Apache struts.