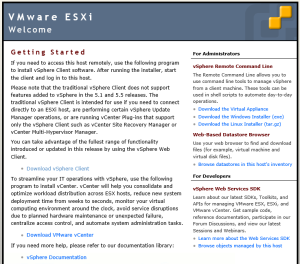 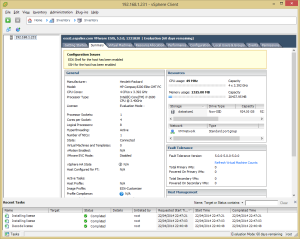 Once ESXi is up you can access the virtual machines running and also vCenter deployed as a virtual appliance with VMware Player. Its available for Windows, Linux and Mac OS X. VMware Player can connect to an ESXi using the command line:

This starts VMware Player to remote connect to an ESXi host (the IP address can also be given as a parameter to the -h command) using the normal credentials.

Once logged in a list of available virtual machine is shown (they can also be powered on and a console to the VM opened). The vSphere Client can be used to manage the ESXi-host (in a windows VM of course…).

The ESXi can also be partially managed using SSH (enabled first from the vSphere Client or from the Direct Console User Interface (DCUI) on the ESXi’s console). Once logged in using SSH the DCUI command can be used for configuration.

And it will open the menu-based console (close it using ctrl-c). There also exists a vSphere Command Line interface (vCLI) for windows and linux for basic command line configuration and administration.